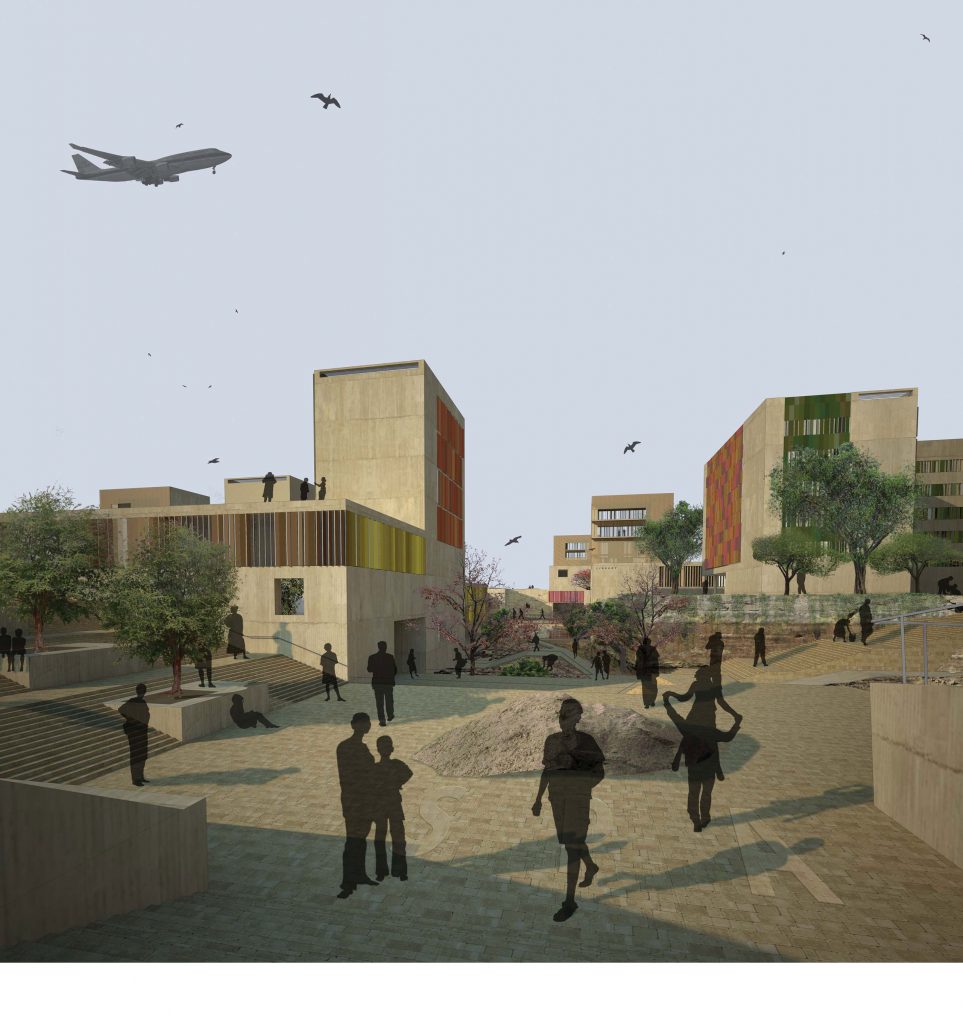 School of Planning and Architecture

The design proposal for the School of Planning and Architecture in Delhi, is rooted in the belief that space for recreation is essential in a city. The design of the ‘Open Campus’ uses multidirectional building blocks, giving one the possibility to move from one arbitrary spot in to another arbitrary spot in the master plan through numerous different routes. 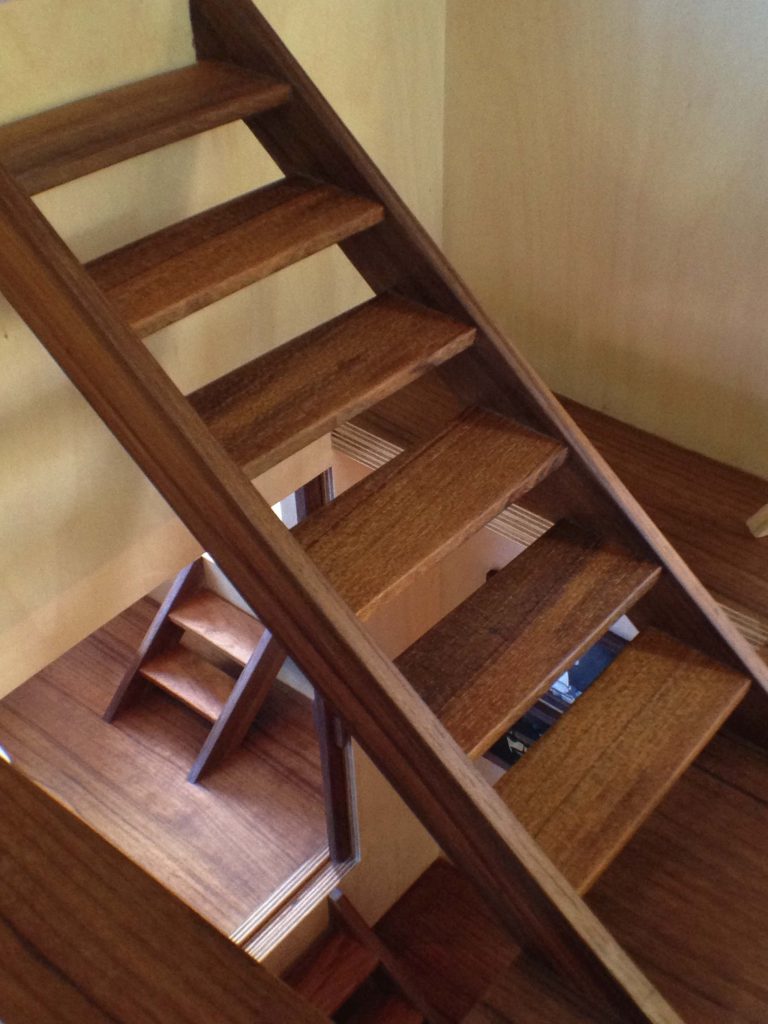 The Spiral Dollhouse is a hybrid between a 1/6 scale version of an imaginary house, an architectural model, and a barbie doll diorama. You can view the three storied house and play with it from all four sides. The rooms are organised in a spiral and turn around the central core. Voids in the floors and openings in the core encourage interaction and play in between the rooms, vertically, horizontally and diagonally. 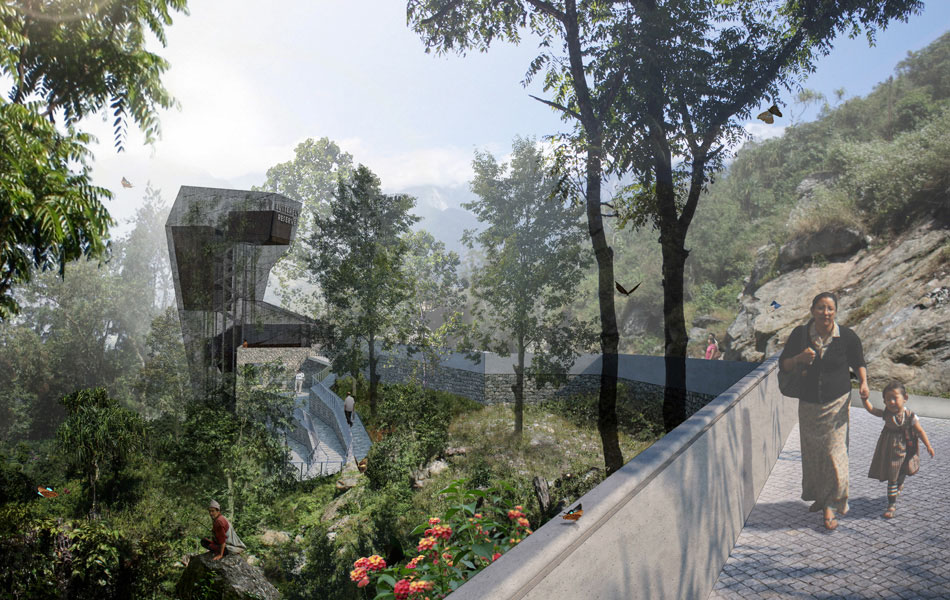 The proposed Butterfly Reserve in Sikkim aims to be a celebration of the butterfly, found in abundance in the region. Today however their habitat is being threatened. As a butterfly perches on tendril legs on a flower barely touching what it feeds on, so the interventions in this sensitive ecological landscape are designed to reduce the interference with the site. 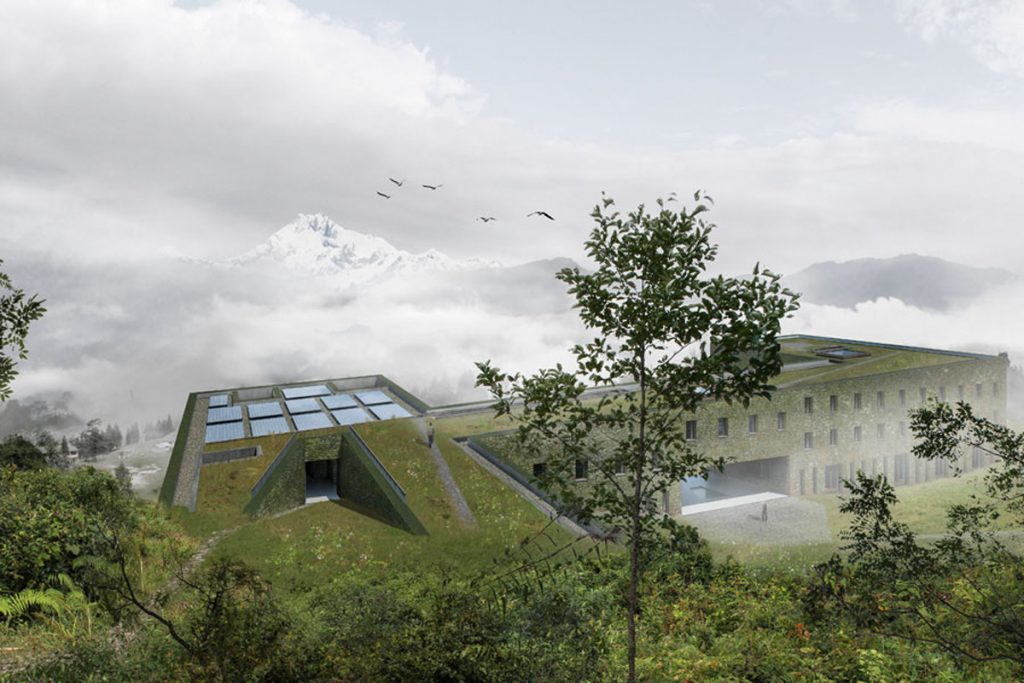 The Biodiverity Training Institute is located near Sikkim’s capital Gangtok. Sited on a slope, it faces world third highest mountain, the Kanchenjunga. The design of the building is compact with a small footprint. It makes use of solar energy, local vegetation and wind. The divers vegetation of Sikkim will become an integral part of the building so that it becomes an education instrument in its own right 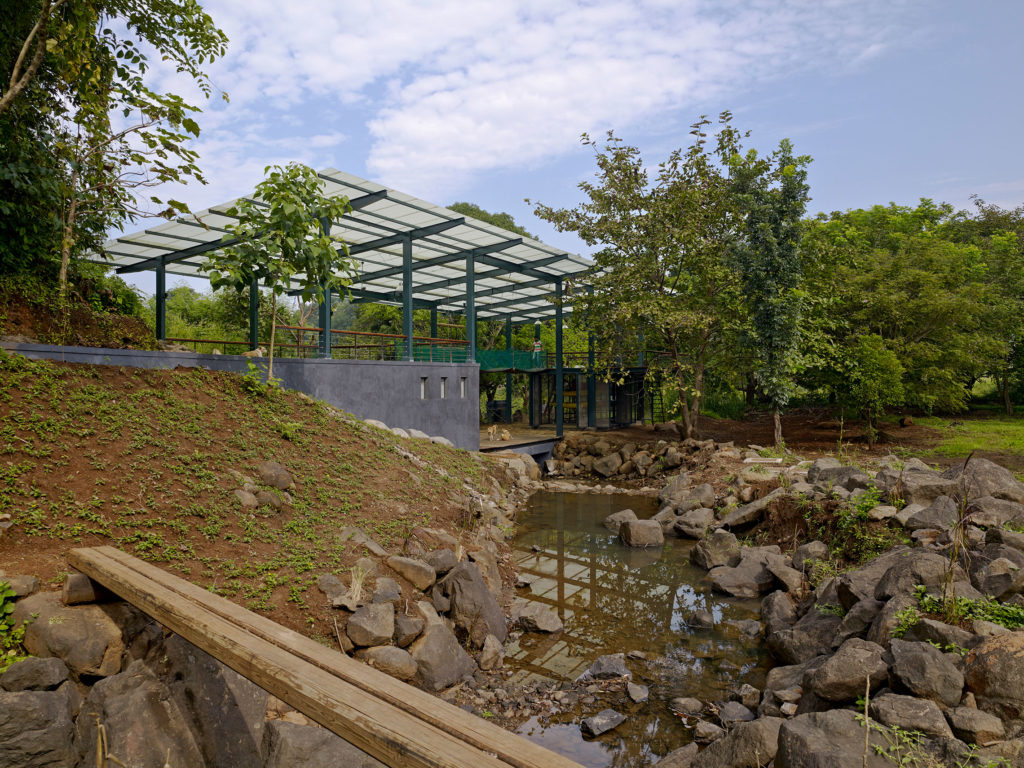 The Magic Bus Learning Pavilion is an interactive building used as a gathering space and play area for underprivileged children who are deprived of places to play in the city. However with a log bridge, a Jacob’s ladder, climbing ladders and a suspension / rope bridge, the building is much more than that. It is a continuation of the challenge course of the Magic Bus Outdoor Learning Campus. 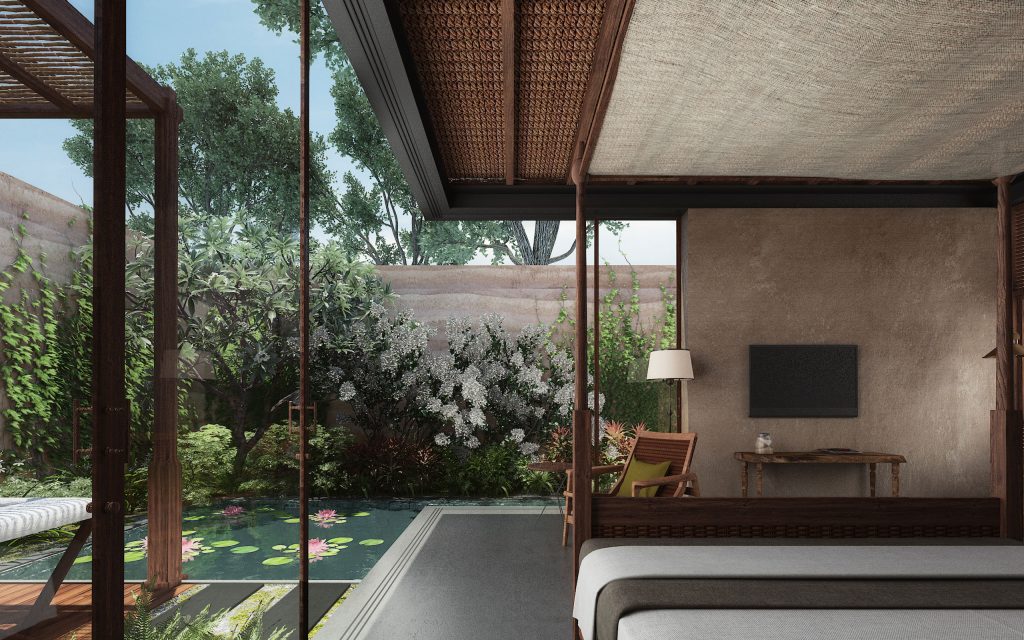 The Mandwa Health Resort is envisioned as a three-dimensionally embossed landscape. It is an architecture of enclosure, where walls define exterior spaces. Guests retreat in private undisturbed courtyard rooms. With ivy spread across the compressed earth walls and water bodies reflecting the sky, the guest rooms extend into the natural environment. 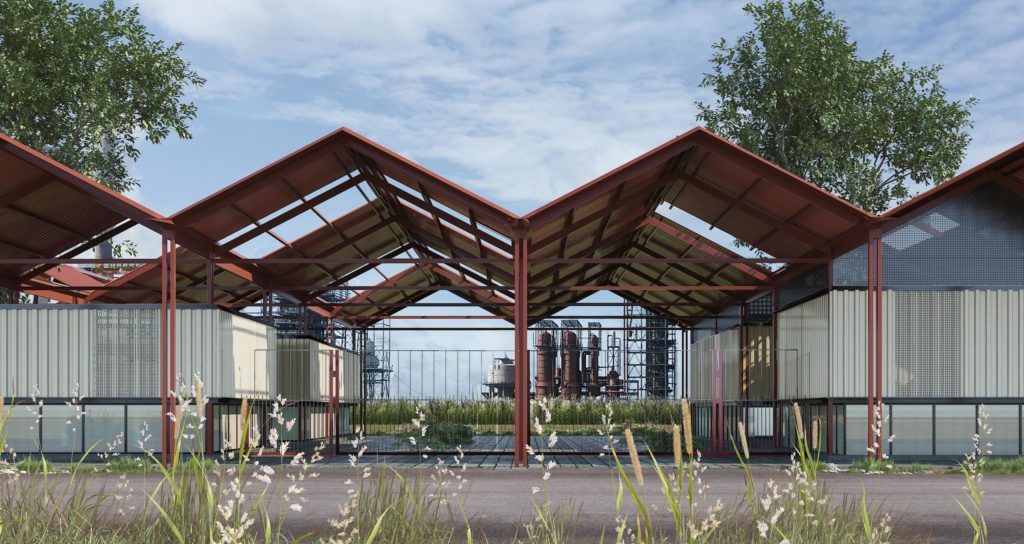 An administration and facilities centre for a sugarcane factory is covered by a large sawtooth roof of 94m x 34m acts. Solar photovoltaic panels with a capacity of 500 kW electricity, cover both sides of the roof slopes. The roof acts as a canopy and frame referencing the silhouette of the factory. It houses a reception, administrative functions as well as a canteen and recreational facilitates. 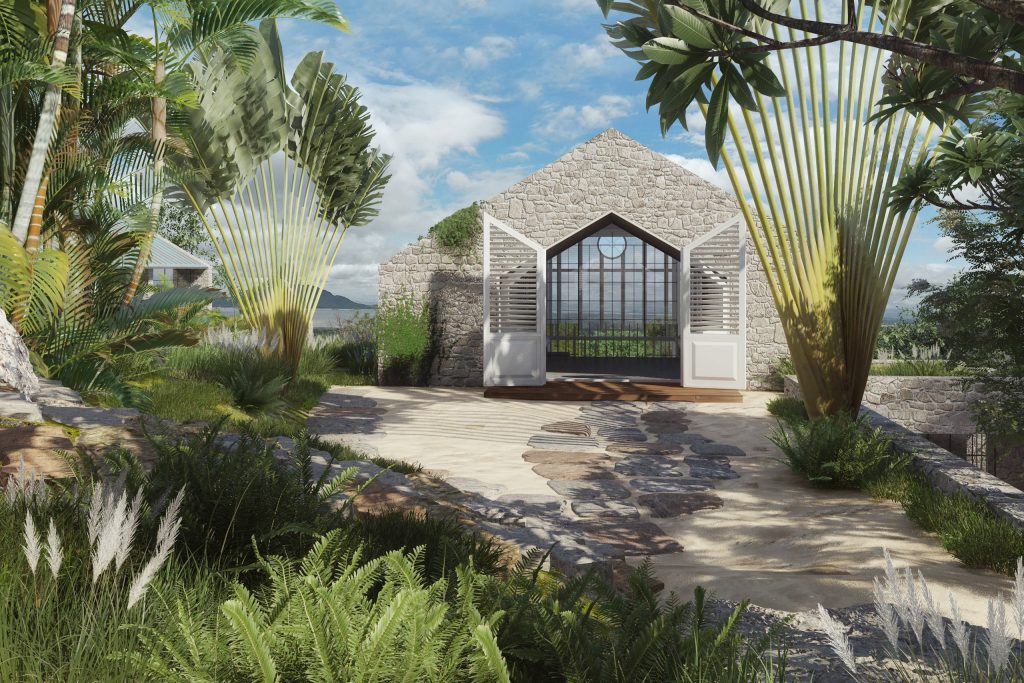 The plantation retreat in Alibag emphasises on the profile of the built form in relation to the hilltop property overlooking the Mumbai bay. Two staggered linear pavilion-like structures, directed towards the view, define the character of the house. They are strong manifestations that act as long spatial telescopes, bringing the distant sea views seemingly closer by. 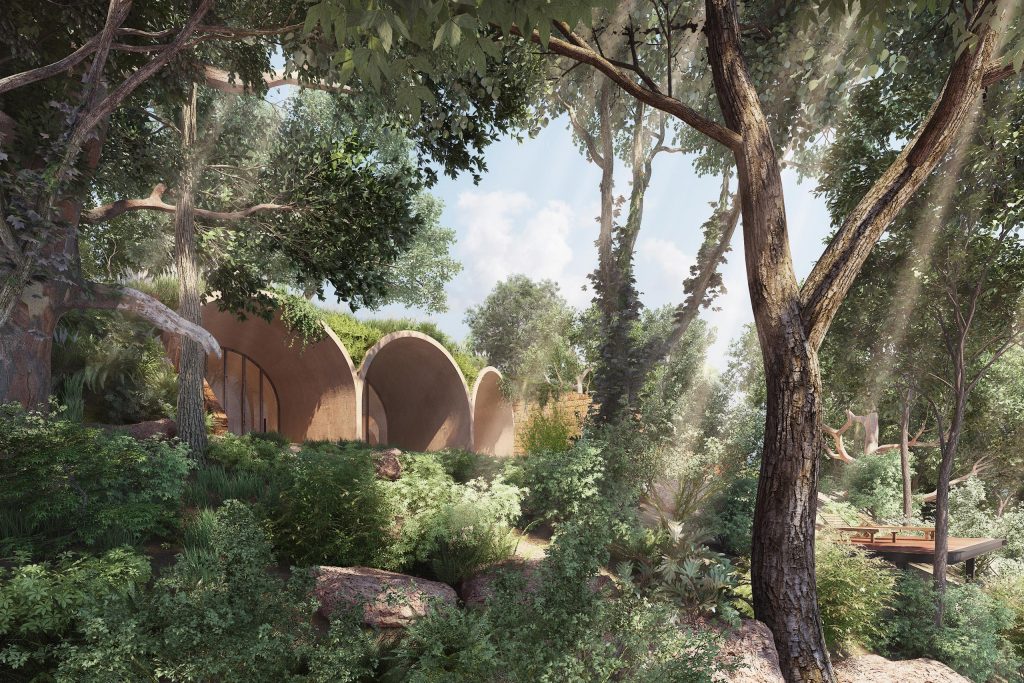 Forest Hills is a quiet picturesque retreat tucked away amidst dense foliage and trees, perching high on top of a mountain overlooking an estuary. Here, 8 underground “cave homes” will be carved into the mountain top. These underground dwellings focus like telescopes to the surrounding views. A staircase gently slopes, as an earth block sculpture, from the plateau in the direction of the homes beneath. 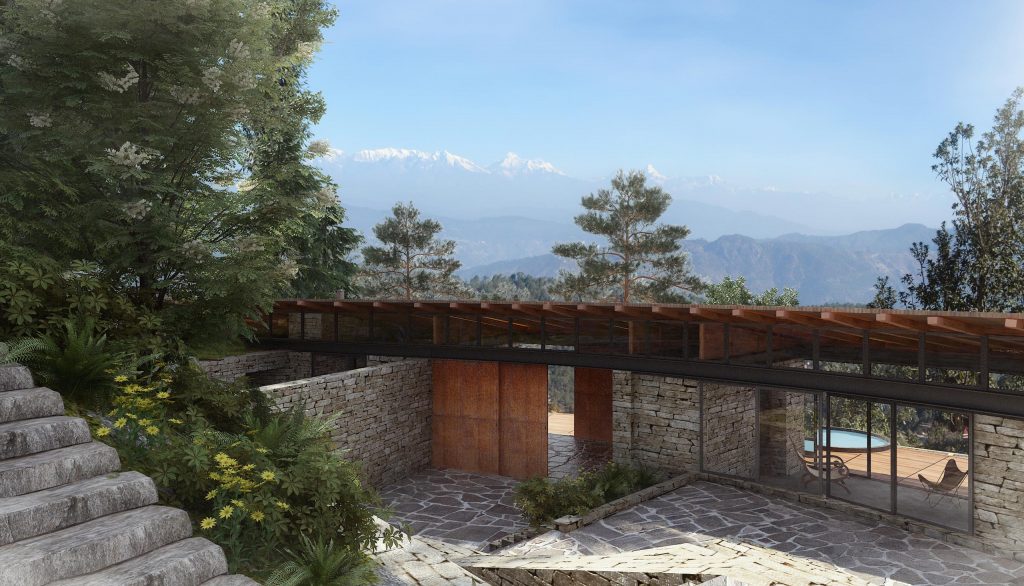 The Mountain Home is located in the Kumaon region of Uttarakhand. A boomerang shaped structure hugs the contour on the upper level. One pavilion faces the view of a nearby reserved forest. Another settles in the middle of a pear and peach orchard. The ensemble of structures act as an extensive photographic device, capturing the constantly changing dynamics of the Himalayan mountainscape. 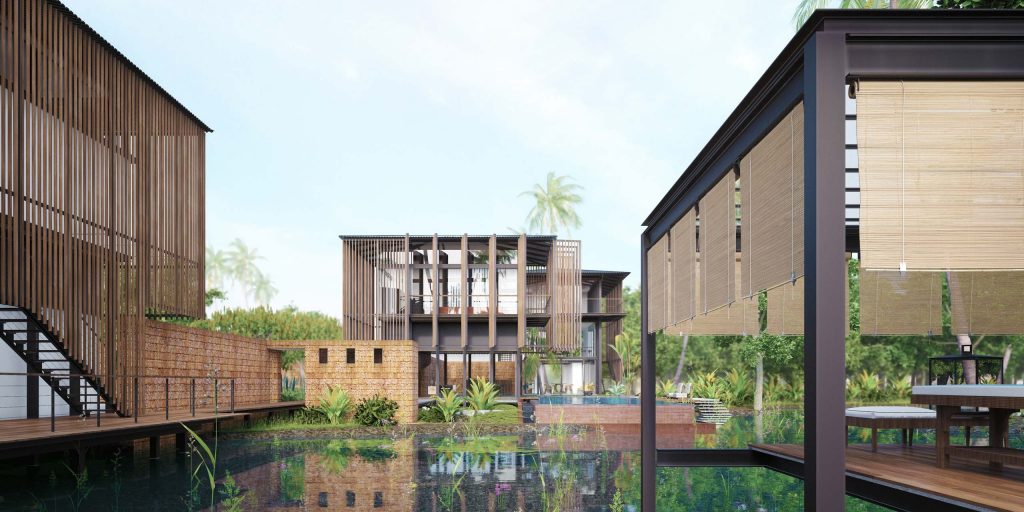 The Wetland Resort in Vengurla aims to revitalise the ecosystem of the site by creating a waterscape with interconnected ponds and waterbodies. Five proposed waterbodies accommodate 16 holiday homes and a boat house. The homes are clustered as stilted pavilions; sometimes on the land and sometimes on water. 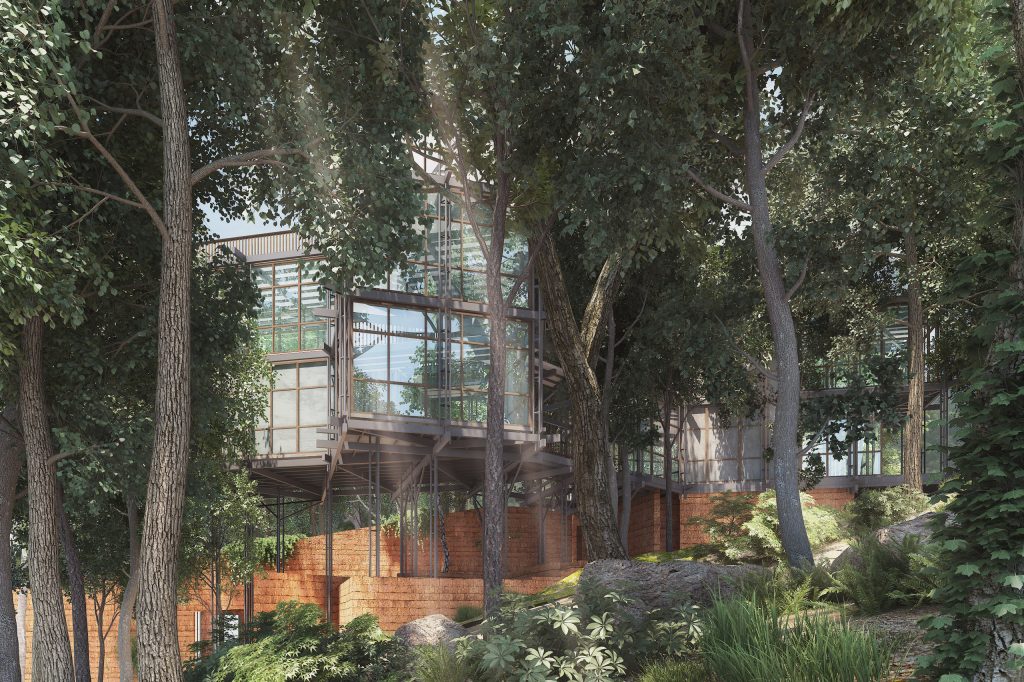 The Socorro Villa is an aerial structure in a thick canopy in the northern part of Goa as part of a luxury residential development designed with 5 emerging architects. Perched on a series of extremely slim columns, the skeleton structure twists and turns between the forest canopy. From decks and glazed enclosures at various levels, residential life intertwines with animal life in the forest. 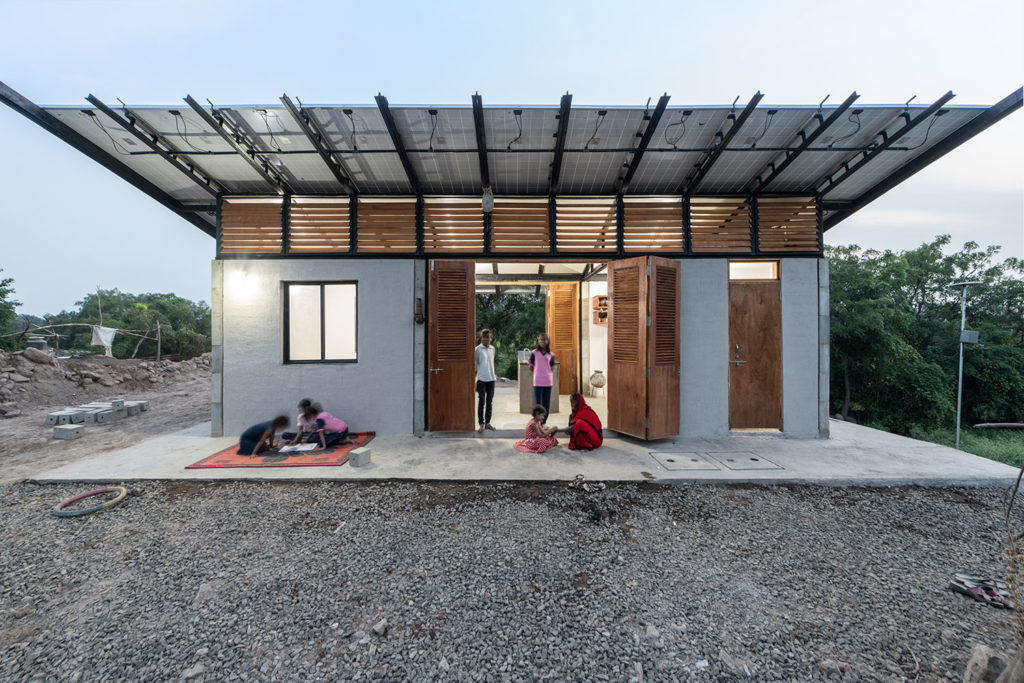 PowerHYDE is the world’s first carbon negative, self financing home for the homeless. It address the scarcity of homes across rural communities and the impossibility of access to financing. It is a radical concept in housing designed for ‘energy sufficiency’ and ‘extreme affordability’. The structure of the house is built in an indigenous prefab assembly technique that makes it easy to assemble in remote locations. 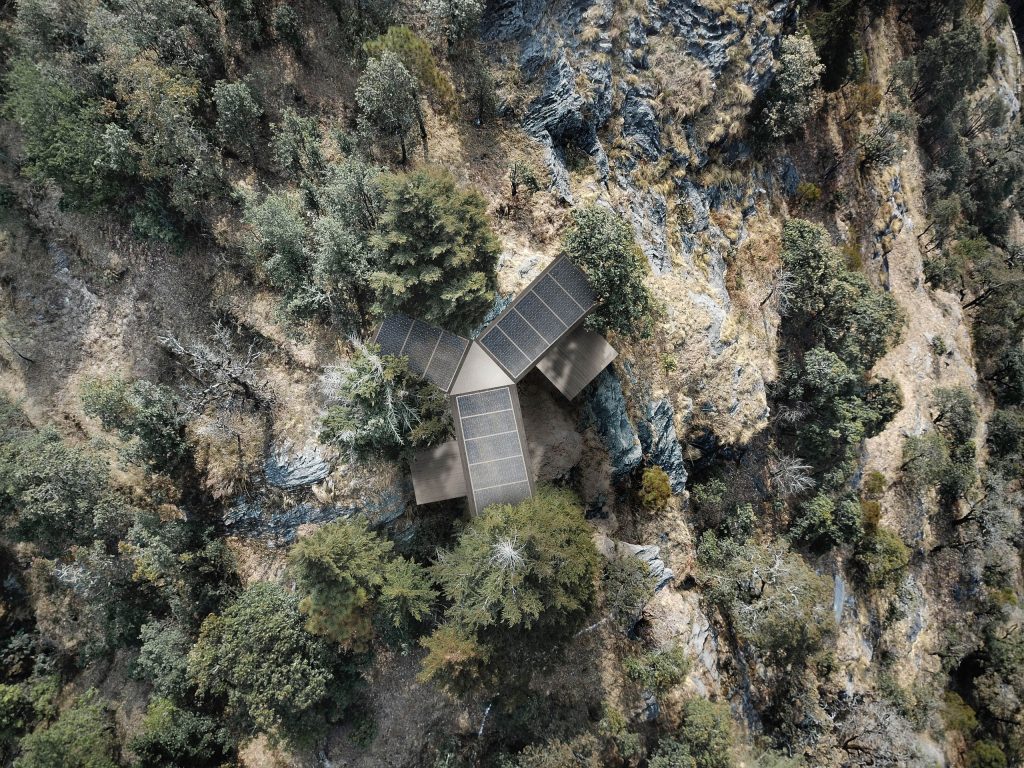 The Himalayan cabin is situated on top of a mountain and frames great views of the Himalayan chains on its north side, while displaying incredible views of the Mukteshwar Valley on its south. The cabin is a cantilever Y shape building and holds all the necessary facilities for a mountain rustic experience. It is self sufficient in terms of water and electricity, thanks to solar panels and rainwater collection. 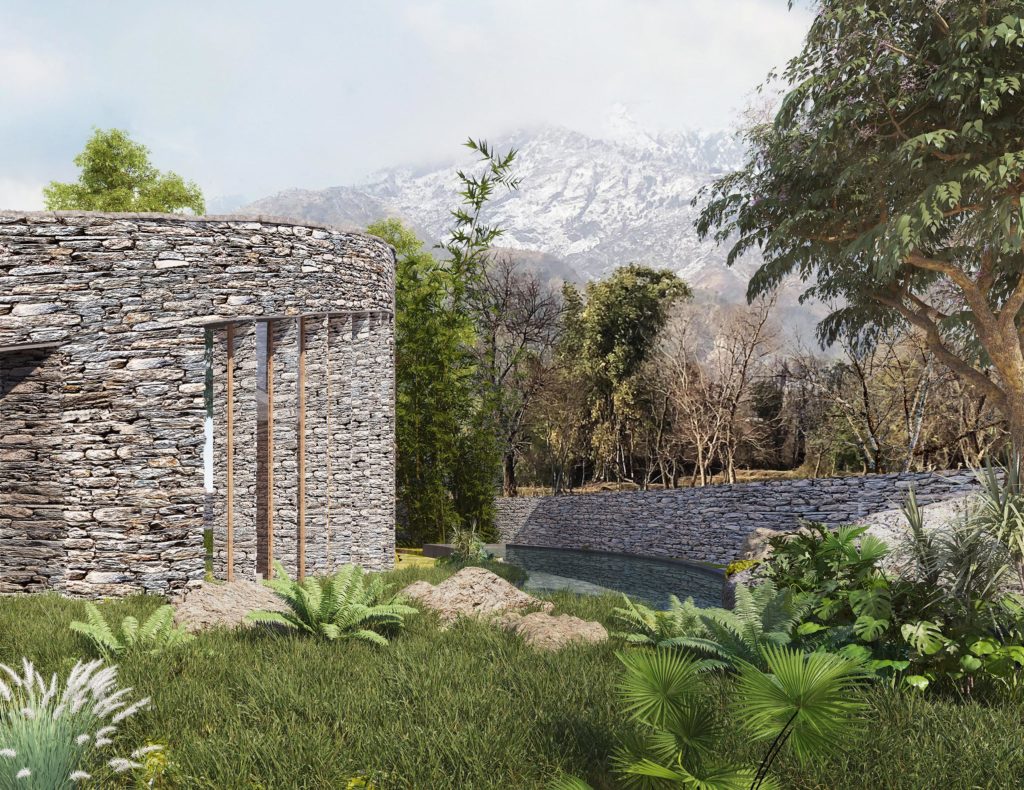 The yoga retreat is conceptualised as an extrusion of its terraced Himalayan landscape. One could imagine that an incidental geological formation pushed up a section of the terraces in the shape of a malformed asymmetrical three winged boomerang. Underneath, above and between the ground plane and the roof, the yoga retreat is a device to experience the landscape in diverse ways. 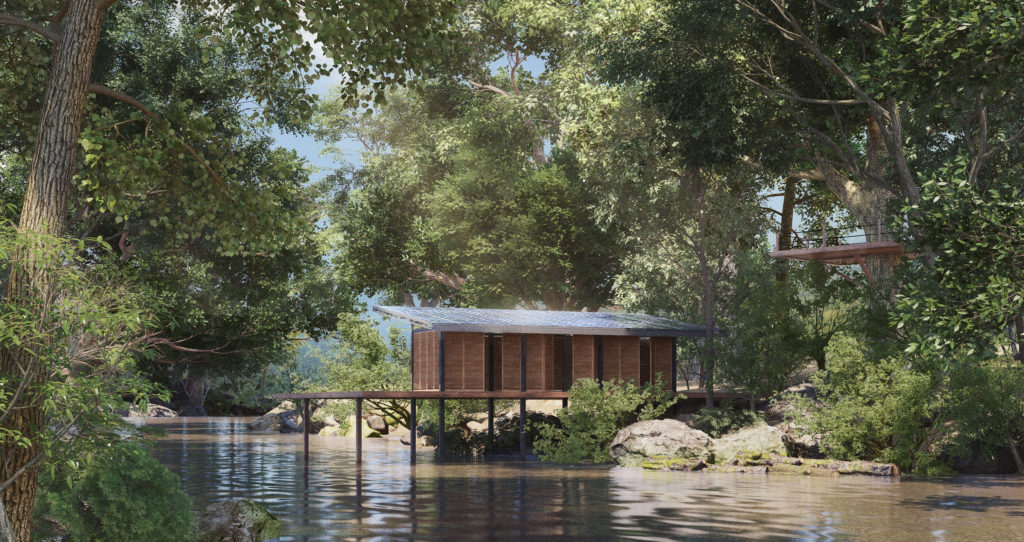 The Vanavihari Eco Resorts are a commendable initiative undertaken by the Andhra Pradesh government. aimed at spreading awareness of the natural environment among travellers. The forest cabins will be located within the natural forest. Since the scenic streams and ponds at the forest reserves attract arboreal and bird wildlife, they make for ideal locations for forest cabins as observatories. 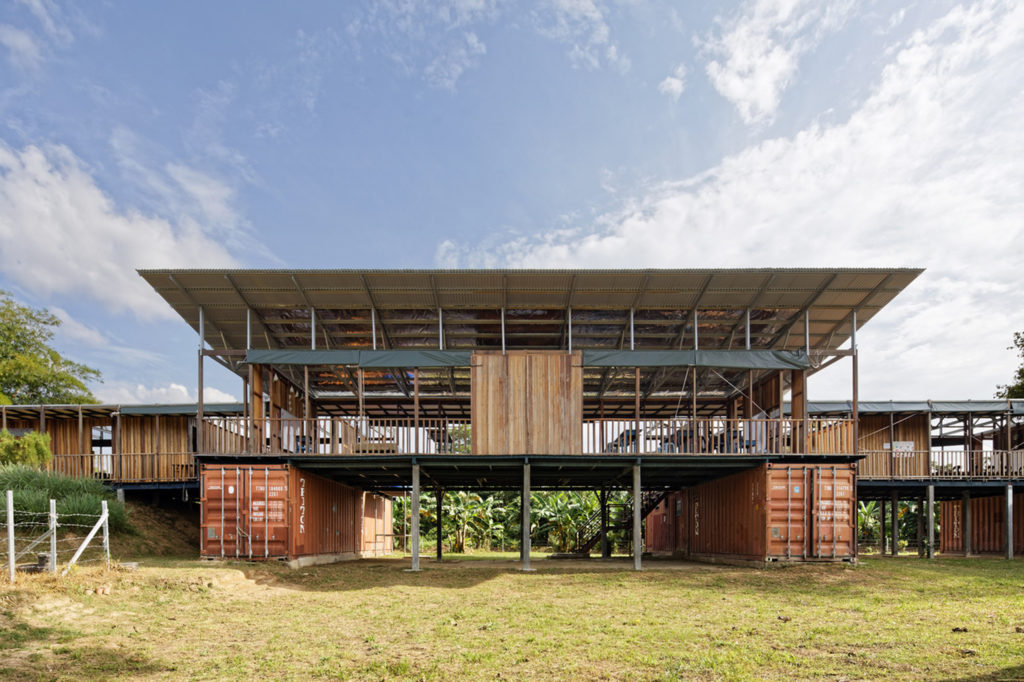 At the Etania Green School a lightweight module for a classroom floats over shipping containers that serve as foundations. Because the classrooms are raised from the ground, they are well protected from any flooding and will be naturally cool by capturing the river breeze. The building’s openness and integration with the site creates new learning opportunities for the students. 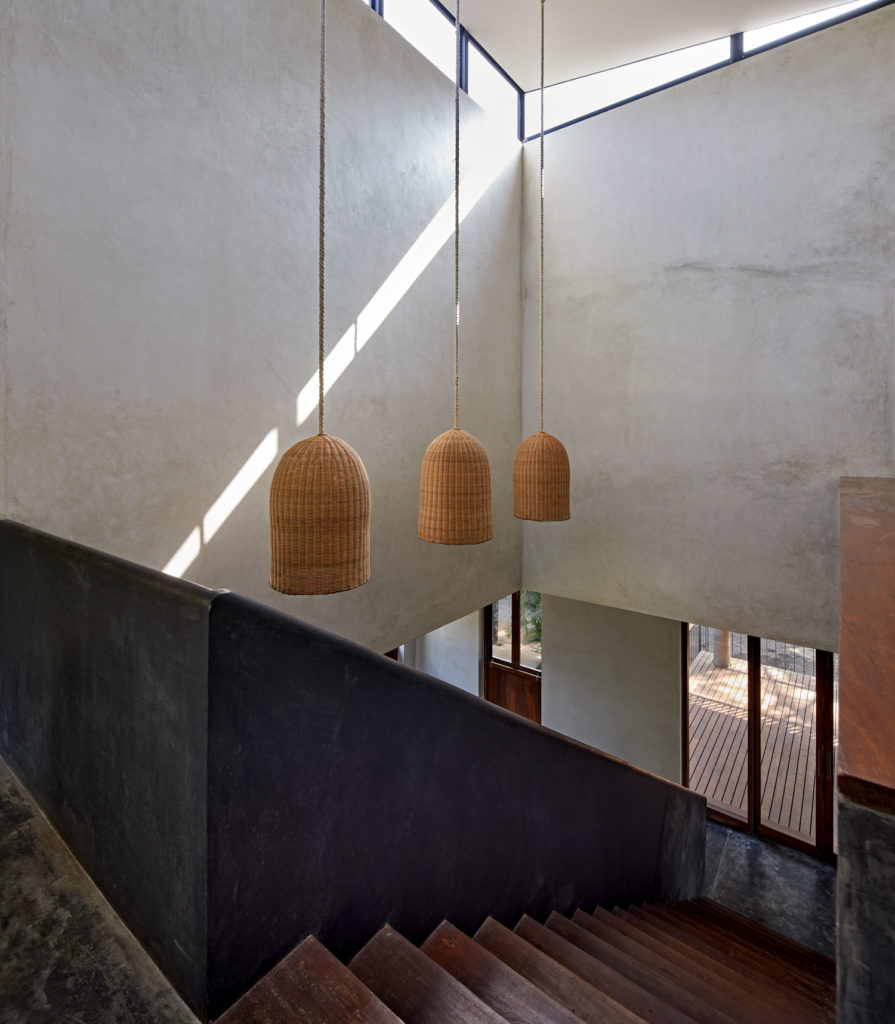 House in a Beach Garden

The House in a Beach Garden used to be segregated from its seafront by a tall boundary wall, It separated the property both physically and visually from the much coveted coastline of the Mumbai bay. A missed opportunity. Therefore the first and most important intervention was to lift the garden up 5 feet above the existing level, such that the house, the garden and the top of the boundary wall, were all aligned in one level. 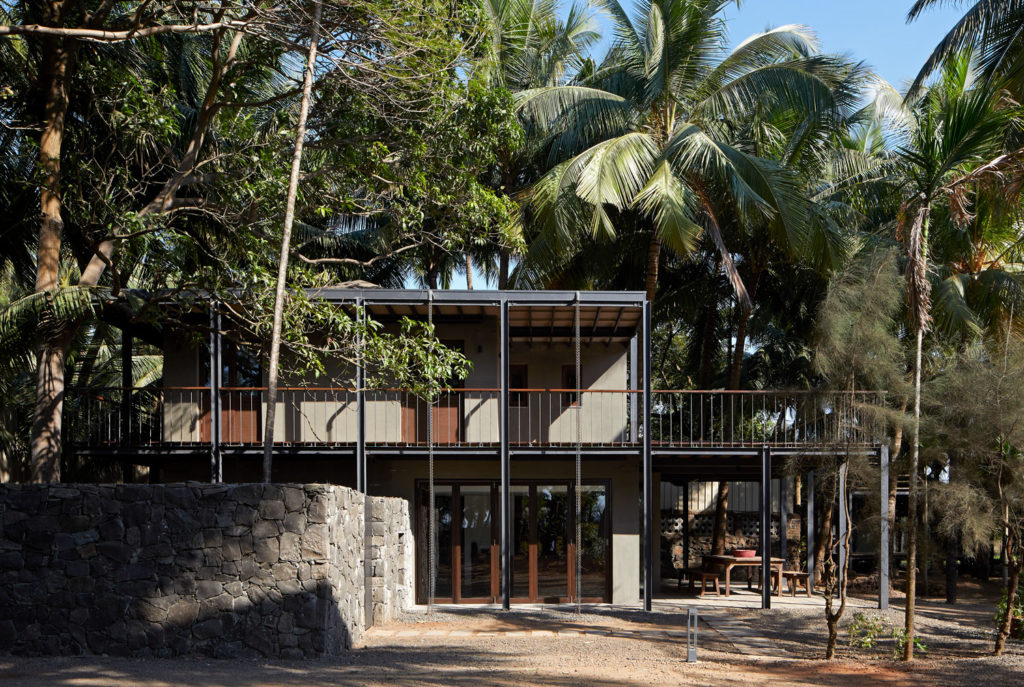 House in the Palms

Built within a beautiful palm plantation, the 30-year old humble structure with four thick walls and small windows seemed unresponsive towards its context. The refurbishment of the house starts with a new imagination of the space, one that is permeable, and pertinent to the surroundings. By reducing the house down to the structure and removing internal walls, the house starts to breath and gets a new life. 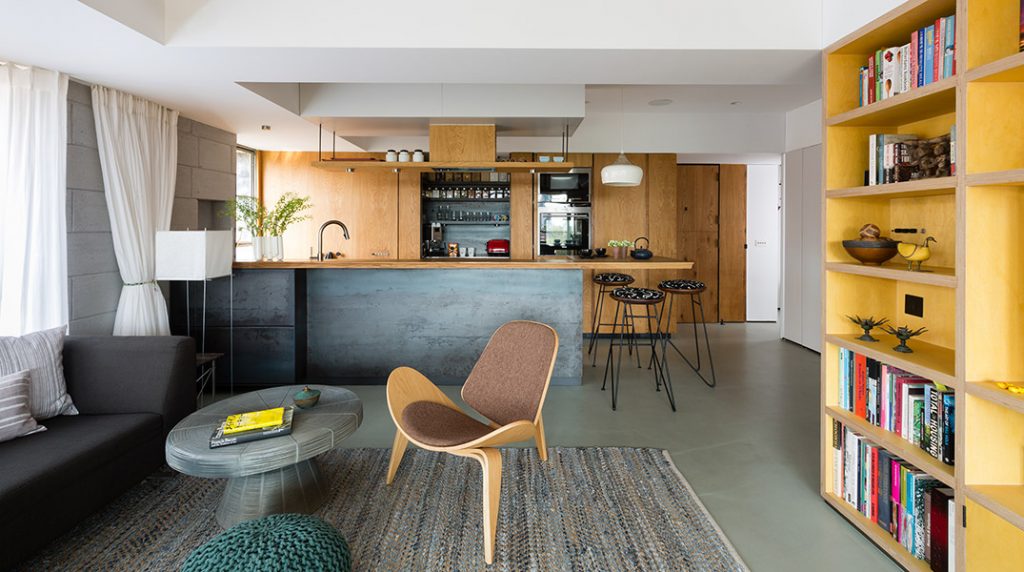 Bandra was once a leafy suburb of Mumbai city. In recent times it has become a vibrant yet highly dense neighbourhood, symptomatic of the crunching space in Indian metropolises. As a result, the floor space of an average household gets more and more constrained and precious. This increasing problem has been ingeniously addressed in a 7th floor apartment in Bandra. 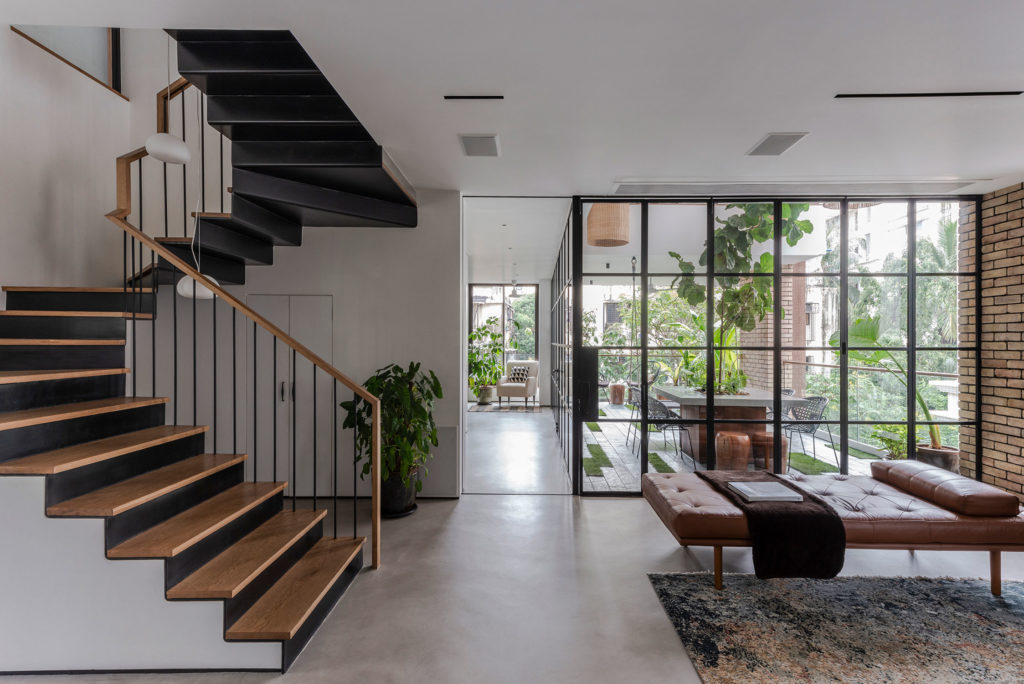 The double height courtyard greets you when you enter the Urban Green Home. The variations in shades, textures and tones intersperse with a tall fiddle leaf fig plant in the central space. the common areas of the lower level of the urban green home as a more fluid space. Spaces extend into each other visually. without revealing each space completely at first glance. 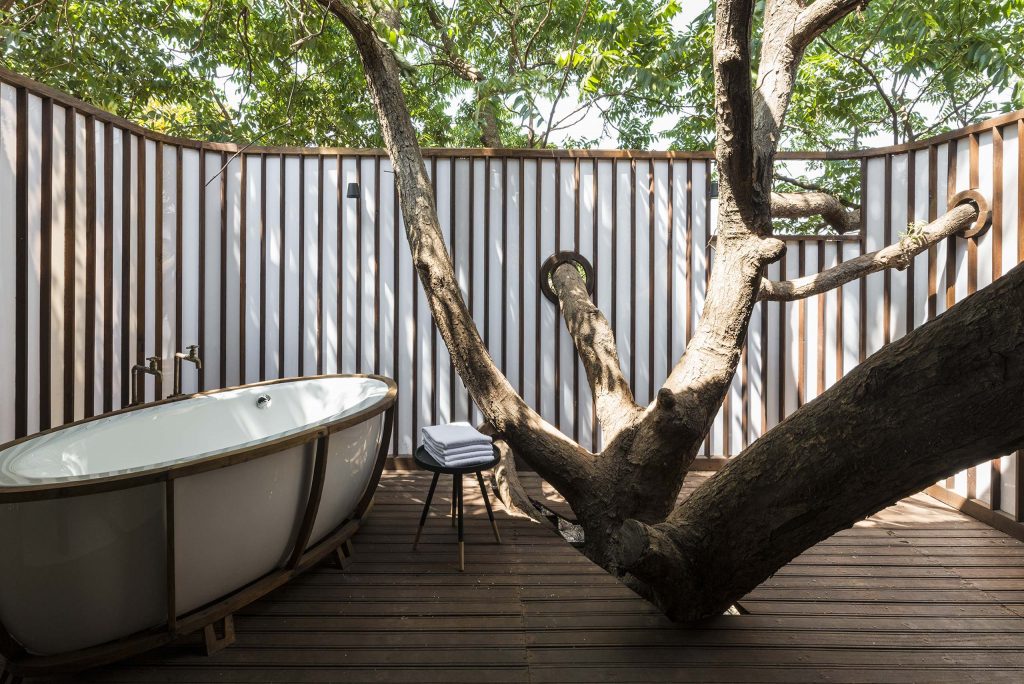 The Treehouse Villa perches on the cliff of a 160 acre hilltop ‘treesort’ property surrounded by a meandering river landscape. The idyllic setting in Tala on the West coast of India, is a stone’s throw away from the Kuda caves. The Treehouse Villa is conceived as a celebration of this forested tropical setting with one main voluminous glazed space below a dominating thatched roof. 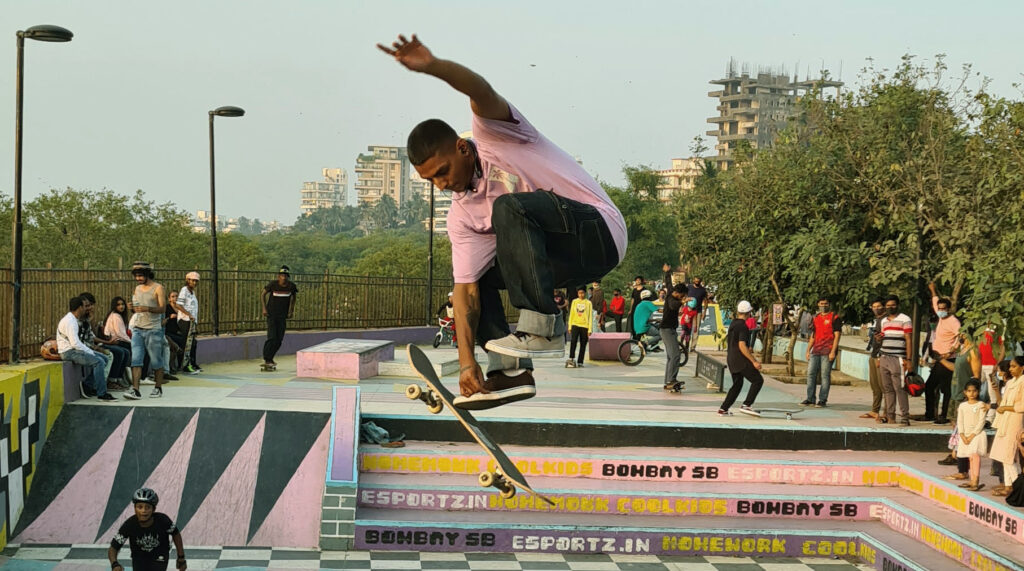 The Carter Road SkatePark adds a vibrant and refreshing new public space to the city of Bombay. It has brought together old and young, beginners and experienced skaters as well. Being the the first skate park in Bombay it has played an important role in attracting new skaters to help grow the skating community of India. 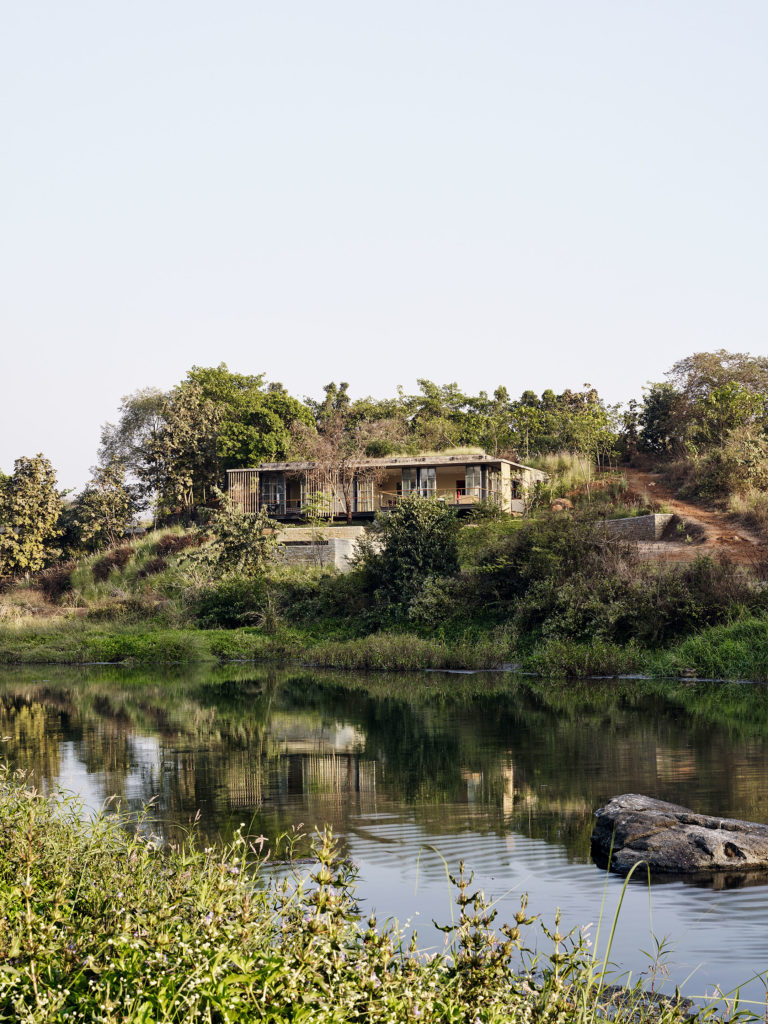 The Riparian House is placed below the crest of a hillock at the foothills of the Ghats near Mumbai. The top of a vegetated roof merges with the top of the hillock, hiding the house while approaching. A bamboo screen surrounding a deep verandah causes an ever-changing pattern of light and shadow throughout the seasons and times of the day, making the Riparian House a ‘sensor’ of light.

House on a Stream

With a stream running through the house, this retreat in Alibag delicately weaves into the landscape. It alternately opens up and closes itself to the different characteristics of the site. The house is like an organism trying to make most use of its resources and surroundings. With its several limbs, it reaches out into the landscape. Each “limb” makes full use of the views within the site and dramatizes special moments. 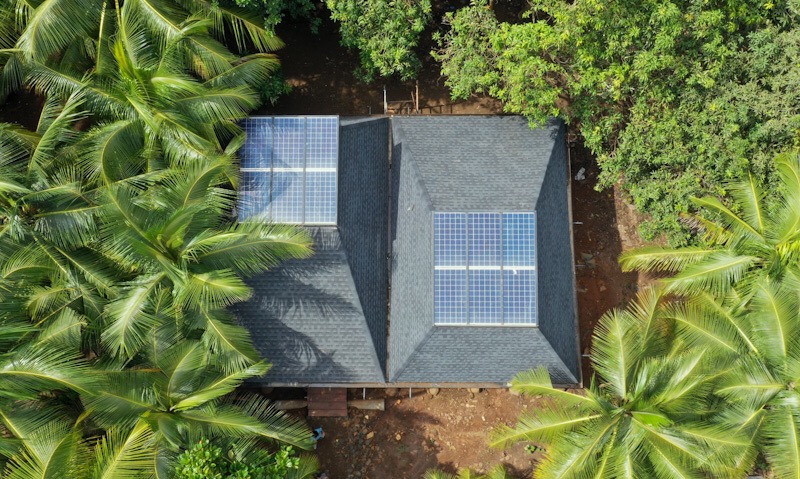 The Mumbai Artist Retreat is conceptualised as a community space. It is an art lab of sorts, that aims to bring together art, ecology and society. One of the buildings on the retreat is an Artist workshop. The completely self sufficient pavilion is a 12m x 10m “tropical shed” with two roofs that are each six meter high. Two solar panelled skylights chop off the pyramid shaped roofs on the top.