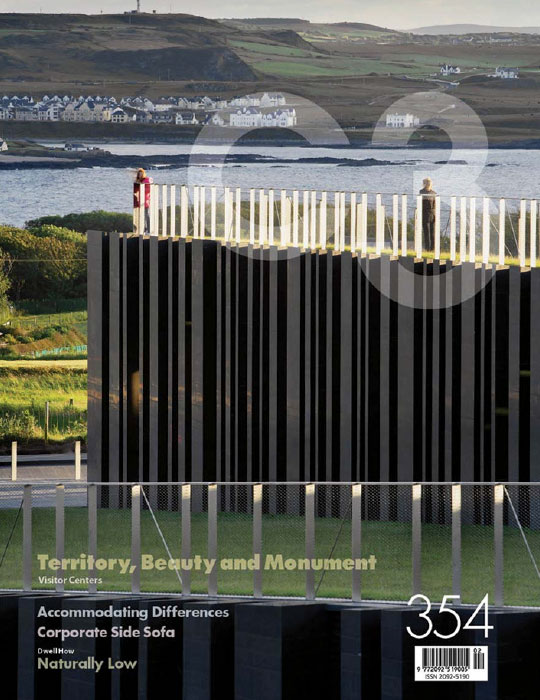 Visitor centres are in the spotlight in this edition of C3 Magazine. This issue opens with Silvio Carta’s essay, ‘Territory, Beauty and Monument’, and features four exemplary projects.

Also in this issue, an exploration of polyvalence beyond flexibility by Nelson Mota, with projects by Agence Chochon-Pierre, nodo 17 and Ecker Architekten. Furthermore, this issue explores the trend for low-height buildings that strive not to interfere with the landscape lines of their natural contexts through use of materials and form. The House on a Stream by Architecture BRIO is featured alongside stunning projects by UID Architects, Topos Atelier de Arquitecture and Jensen & Skodvin Architects.

All the typical various ways of approaching a project seem to be narrowed down by architects when they are facing a site characterised by a strong natural component. This is something so common as to establish a trend, which can be characterised by the adjective LOW. A low height building that does not interfere with the landscape lines, two superimposed boxes standing lightly on the ground, a house that is shaped around a stream and another one that is created enclosing the space in a forest are all results of a LOW proactive approach towards the environment.

Naturally LOW can be associated with several terms, in order to depict physical configurations, the extent of the impact on the land, attitudes towards the land, but the real message that is within this word is that it is possible to obtain marvellous architecture through the respect of nature as a leading concept in the design process.

House on a Stream

A virtuous connection with nature can be achieved in a subtle unity. An example of this, is the House on a Stream in India. This project is designed by the Mumbai based firm Architecture BRIO. The interpretation of the site in which this weekend retreat is inserted has been the key for the design. Specifically the watercourse has been the main focus point. The architects have decided to shape the program of the house around this natural element. They chose to allocate the program in two volumes placed on the opposite banks of the stream. Hereafter they connected the two elements with a bridge.

As a consequence of this, the house experience is characterised by the movement between the two sculptural volumes. One contains the master bedroom, and the other contains the guest room, the kitchen, dining and living rooms. Observing the plan of this single storey house it is possible to notice how the concrete sculptural volumes have been shaped and arranged to almost touch the boundaries of the stream and some surrounding trees in a sinuous embrace.

The parallel between nature and the house can be also highlighted on a non material level. For example, the water flow can be metaphorically linked with the movement of the occupants along the bridge. Subsequently the covered walkway links it with the entrance of the larger part of the house. The volumes containing the rooms project themselves towards the landscape.

Like an organism it adapt their shape according to the uneven ground, the tree positions and the functions that they contain. Thanks to these arrangements the totality of the house is never perceived. Instead it is fragmented into multiple images. In addition the surrounding trees continuously change this experience with their crowns and shadows on the natural looking textured concrete walls. Summing up the ever changing section, the plan complexity and the textured external materials are signs of a humble approach to the site, which has led the architects to a flawless insertion into the nature.