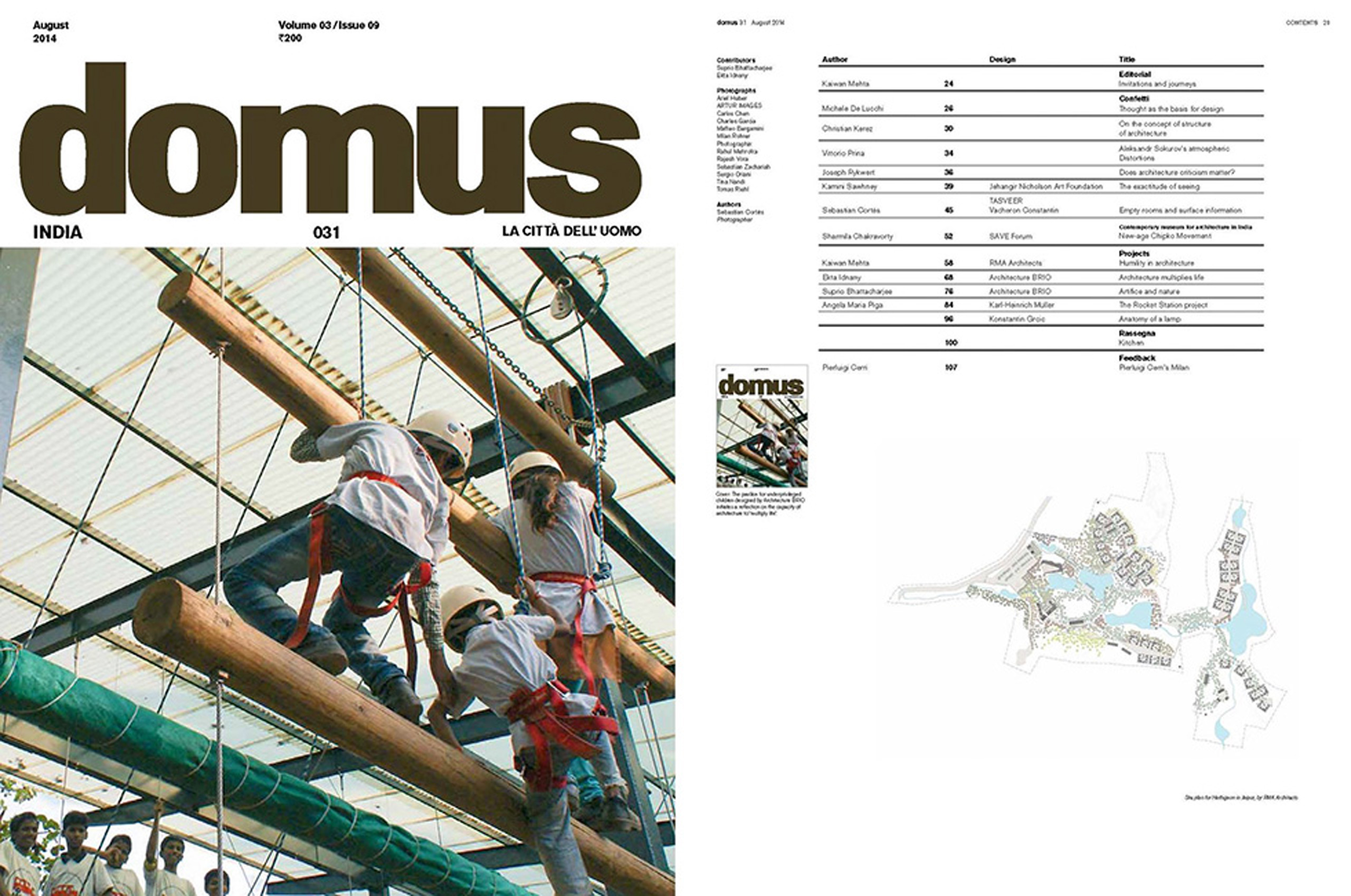 The House on a Stream plays with architecture as an artifice, an object of defined form and shape that sits within a landscape, within a geography. Deft use of spatial fluidity in planning combined with materials and details that lead to a visual interweaving of context and design produces the classical object of architecture, a brush with nature…..”

In many ways the pavilion for underprivileged children design by Architecture BRIO initiates a reflection on the capacity of architecture to ‘multiply life. It encourages and produce an energy of encounter and collaboration, play and creativity. Architecture in this project is minimal but sharp and precise. It involves effort, thought, and technique to construct spaces that defy generic definitions. Yet it accommodates everyday programmes. Furthermore it lets possibilities for programmes beyond expectations to shape up, and create the possibility for chance to shape things. It is between possibilities, chance and the shape of life and action that this building – non-building operates.

The Magic Bus Centre at Karjat is a campus for underprivileged children to experience sports and team building activities, The Laureus Learning Pavilion at this campus is essentially composed of the voids that envelope the building. It reinforces that the act of the production of drawing architecture is equivalent to the act of crafting the building.

this text first appeared in Domus by Ekta Idnany

The Laureus Learning Pavilion by Architecture BRIO situated in the idyllic surrounds of the Western Ghats, is, in the words of the architects, “Partly a building, partly a challenge course.” It is in fact easier to characterise the project as a series of programmes that come together in harmonious proximity than to call it a building. The pavilion re-interprets an oft-used architectural tenet into ‘form multiplies function’. The simply existential nature of the project lends itself to multiple inventive uses.

An NGO founded by Matthew Spacie, Magic Bus was created with the express purpose to help channel the energies of the underprivileged children of Mumbai into sports and team building activities. Conceived after several successful weekend camps, the permanent Magic Bus Campus at Karjat, Maharashtra, consists of several buildings. The first phase of the Campus was designed by Rahul Mehrotra Associates. This included program such as children’s dormitories, a dining pavilion, volunteer’s accommodations and a resources centre. Architecture BRIO designed the second phase of the project. This included proposals for staff accommodations and a resources centre.

Placed apart from the several other facilities on the Magic Bus campus in Karjat, the Learning Pavilion is nestled within green foliage over a rivulet. This seasonal stream flows into a river and is anchored to a hillock at its southern end. A large football field forms the foreground of the project with the picturesque Ghats forming the backdrop. Conceptually too, the programmatic masses were composed to formally mimic the way the table top hills of the surrounding Ghats situated themselves within the dense foliage of the lower valleys.

Rather than blend in, the project looks to collage itself into its milieu. Two aligned lower storey masses separated by a wooden deck hold the necessary functions of the toilet block and a storage shed for watersports equipment. These masses integrally support the upper decks. Here team-building activities, discussions, games and workshops are conducted and cheered at. Double-height spaces below the roof are largely used for working a Jacob’s ladder and other activities. Additionally a ropes bridge connects the two upper decks.

The project values the outside, by means of views and the active double-storeyed voids, much more than any internal functions. All the approach roads and means of access, whether over the topography or on to the decks, are in fact designed as part of an obstacle course. The architects re-interpret the quotidian but oft-mundane circulatory functions of a building. Therefore each experience of reaching the building on any of these paths is rendered unique. Perhaps it is fitting that a building designed for the use of children eschews the trappings of routine regulations that come to govern the adult world. In doing so, they probably attempt to return one to the base origins of human experience.

Also, if one were to examine one’s initial reactions at encountering the building then it would seem that the project was put together with only the absolutely necessary architectural elements. But closer evaluation of the drawings suggests a unique interest in the production of the craft of architecture. It might therefore be fitting to examine the project through what Gottfried Semper iterated are The Four Elements of Architecture. This was his attempt to explain the origins of architecture through man’s anthropological development of craft. Semper’s book explains architecture and its origins through four different elements. The hearth (ceramics), the roof (carpentry), the enclosure (weaving) and the mound (stone masonry).

Like the training activities, designed to challenge balance and agility, the two prominent bulk elements of the lower storey also seems to negotiate a precarious balance of mass and void. The most prominent mass element of the building gravitates towards the most conspicuous landscape mass. The hillock on the site is where the building seems to be anchored. Here it finds its proverbial ‘ground line’. On closer examination of the plans drawn by the architects it is therefore no surprise that they could also be read as sections. The toilet block is materially rendered to completely dominate in its bulk. With minimal openings and dark neutral colour, it unabashedly asserts its solidity.

The building seems to get progressively lighter as one moves away from the hillock and towards the vast open expanse of the football field. This lightness is embodied in the plexiglass roof. This is mounted on a system of steel columns and girders. Placed high above the first floor decks, the roof allows external elements of nature like breeze, light and views to completely encompass the inner space of the building. Essentially the roof not only shades and shelters the project, but also ties the disparate facets of the project together. The sectional drawing delineates the careful attention to detail by a master carpenter, however simple the detail. While the roof seems extremely structured in its material renderings, the other carpentry elements lend a playfulness to depart from the rigidity. This holds true in for example the way the Jacob’s ladder are suspended from the roof by crisscrossing tension cables.

Semper stated that the origins of the enclosure were to be found in weaving or screens. The more commonly found walls these days were a product of added function of structural stability. The pavilion displays the idea of enclosure in the materiality of the watersports storeroom. This space is used to hold kayaks and canoes. Double doors made of steel mesh envelopes this store room on all sides. The enclosure on the ground floor is contained in its massing. However it continues to contribute to the lightness of the building away from the anchoring mound. Another factor contributing to the release of the building at this end is the floor deck. Since it projects beyond the confines of the shed to cantilever beyond, it extends views onto the football field.

The final aspect or the idea of stereotomy is to be found in the rusticated use of stone masonry to form the plinth. But it can also be found in the interlocking wooden planking that goes on to form the upper decking. The chunky and rudimentary stonework of the plinth that surrounds the shed contains and grounds the lightweight structure above it. In contrast, the long lines of the intersecting planking on the upper deck extend the horizontal planes. It extends laterally into the infinity of the horizon.

As much as the tangible materiality of stone, steel, wood and glass produces this building, it is equally also composed of intangible aspects. The architectural drawings, like points lines and planes, define this intangibility. Points and volumes help to locate and anchor the building to the site. However the lines and planes also allow it to take flight and extend its domain endlessly. Architecture BRIO has perhaps tried to demonstrate that for them the act of the production of drawing the architecture is equivalent to the act of crafting the building. The Learning Pavilion, a ‘Non-Building’, if one could call it that, personifies an essential dialogue composed of the most elemental aspects of architecture. Composed essentially by the voids that envelope the building, its mass and materiality act like the par important silence or pause between notes that make music.